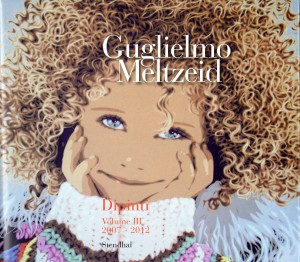 “Palpitare lontano di scaglie di mare” [remote palpitation of sea scales], Eugenio Montale’s verse reveals the vivid luminousness of the Mediterranean horizon on the Ligurian Riviera: drips of pure sunlight reflected by celestial blue waves, white-horses, silver breakers, diamonds on waterside… And I reflected too. I hesitated, I delayed, I long tarried before writing my feelings before putting my sensations – roused by the images Mimmo puts on canvas – into words on paper; few commas – I am sorry – for this fluvial discourse (not quite “critic”) that falls downstream about something I saw and admired since I was a boy – something that undoubtedly imprinted my view notwithstanding intellectual or cultural influences; so it evokes the ékphrasis of the poet. I remember the profile of a bridge among boughs, and that one of a girl’s face amongst the copper brooks of her ruffled hair, the graphic mosaic her lineaments emerged from, then dahlias, hydrangeas, peonies, foreshortenings and landscapes, even without pigments, because bleached by snow, vanishing under the snow, ineffable, nevertheless as tangible as real snow.

Such a mark has lasted. Still the art of Guglielmo “Mimmo” Meltzeid evolved towards more splendid, fluid and limpid, varied, complex, and yet absolutely plain subjects. The rich and famous are often among the buyers of his works (although he agrees to portray the “nice” ones only), but we have not to be deceived by this. Sure, that kind of privileged people appears protagonist: fortunate demigods with golden lifestyles, very beautiful women very beautiful blond kids (Vanessa, 2001; Alejandra, 2006; Veronica, 2010; Margherita, 2012), their loisirs and sports, wonderful racing-boats or sailing-vessels (with resounding, stellar names like Orion or Partridge), luxury gadgets and cars, some brand-new Porsches in moonbeams, the glittering metallic instrumentation of a vintage Ferrari “GTO” (The Red One, 2001), the radiator wings of a sparkling Harley-Davidson with a yellow butterfly onboard. Photo of opulence. It is a superficial impression we ought to reject; on the contrary, those are not but pretexts, inspiration cues which became signs or seeds of private memories inside and outside the frame, journeys, myths and mysteries, the fascination for genius, the fate and the play of destiny, a sharp, however indulgent, not moralistic irony on the vanity of expensive tinsels against the natural withering of ages (it occurs to me Walt Whitman), against the drawing near of the ineluctable end. It happens the hidden woof of the texture of human existence shows itself through the apollonian veil: exciting or boring, happy or sad to everyone, but able to solve personal questions or social issues by means of joint efforts, and collaboration between individuals, genuine and effective solidarity, no blab-blab… We should trust fantasy, supported by mind, purpose – and innocence – will save the world again (The Voice, 1973; For UNICEF, 1982; All Together to Win, 1994; The Flame, Turin 2006 Olympic Winter Games).

I prefer certain cuts (St. Valentine’s Day, 1998; First steps, 2012) and zoomed details, the close blow-ups of objects next to pictures within pictures quoted on the background (e.g. the gigantic Cartier watch in The Time Machine and Tomorrow’s Room, 2002 – moment and memento of the past life, relentlessly elapsed day after day, scanned by minutes, in the attempt of locking it up measure for measure), the abstract concepts Meltzeid identifies with rather concrete things (Porte-bonheur, 1986; Continuity, 1990; Forget-me-not, 2004; Apparition, 2006; Childhood, 2011), also illustrated by humorous situations (Freedom!, 1983; On the Sly, 2006; Cu-cu, 2011). According to his motto, he exposes, proposes, never imposes symbolic interpretations, or his own Weltanschauung, he let us read him by different logical levels of understanding. 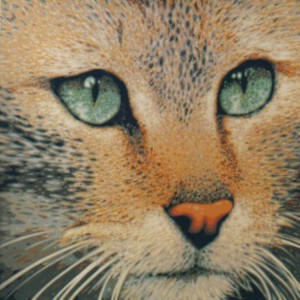 Liquid shining painting (aren’t we all made of body and soul, H2O and colour?): it does not matter what scene is drawn, it’s the same matter, the same substance, as if quintessence of dreams, to permeate the creative universe, to compose the harmonic – or disconcerted – concert of tones and hues, chromatic globules, atoms and molecules, ultra-light elementary particles, leptons. It seems the kaleidoscopic tondo of the small harbour of Portofino, a basin like a looking-glass where a myriad of bright refractions are mirroring the coast-line. Here green feline eyes are instead, vibrissae, a cat’s muzzle.